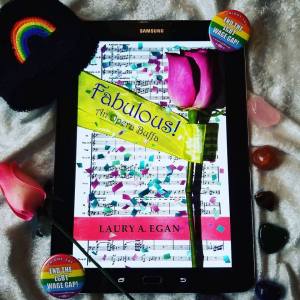 Fabulous!: An Opera Buffa is a fast-paced, madcap adventure of a gay drag queen named Gil living in NYC who wants nothing more than to be an opera star. But things get complicated fast when Gil lands roles in two separate operas – one as a soprano (disguised as a woman), and one as a tenor – and also becomes the pet singer of a mob boss. There are no lulls in the action in this book, keeping the pages turning and turning!

As a person who very much falls under the LGBTQ umbrella, I will admit that there were a few flags that went up for me in the first third of this book (or so). The protagonist, Gil, has several traits that make him initially unlikable (such as stealing a server’s tip – yuck, yuck, yuck), and unfortunately, many of these traits are existing negative stereotypes about either gay men in particular or the wider LGBTQ community. Now, a protagonist doesn’t have to be perfect by any means (nor should they – it becomes unbelievable and boring at that point); but it’s a very fine line to treat with representation of us queer folk these days. Gil and many of his gay friends are promiscuous, dishonest, and confused about who they are (especially Gil on that last one). To add fuel to that fire, a huge plot point is Gil’s deception about his gender or who he is. I know that the line between drag and being trans can be quite thin or blurred, but these days I find it a little unsettling to tell stories about an LGBTQ person deceiving everyone around them with regards to their gender (as people feeling ‘deceived’ is probably the most commonly cited source of the “trans panic” response, leading to very real deaths of trans people).

That being said, once I removed all this heavy, “very real-world” context from my feelings about it, the story was great and the characters entertaining. I did feel that Gil grew a lot as a character by the end, and his own realizations about himself and learning process about who he really was was very rewarding to read and experience with him. The humor in this book is great – very reminiscent of drag humor in general, of course, which is always hilarious! – and the story was engaging. Overall I really did enjoy the book. My main reasons for giving only three stars were just the concerns cited above about the possibility of perpetuating negative stereotypes and/or false perceptions about trans people (and again, this book is not about trans people – but I think it’s likely that some who are less familiar with the difference could become easily confused).

This book had my head spinning! Fabulous!: An Opera Buffa takes readers along for the ride as we attempt to keep up with the exploits of a gay drag queen named Gil.

The plot hinges on what I, as an LGBTQ+ person, consider to be delicate subject matter: deception about one’s gender. I wasn’t completely sure where where the book would go regarding that, but I’m glad I read through to the end.

I actually knew very little about the opera scene going into this novel. At times, the jargon lost me a little – but I still found this to be quite the entertaining and amusing read. I very much enjoyed the drag humor.

The characters (flaws and all) are interesting and funny. The story sets a fast pace. There are layers upon tangly layers that deal with and explore identity and performance. By the end of the book, Gil’s character growth was satisfying! – Jake ⭐️⭐️⭐️

This site uses Akismet to reduce spam. Learn how your comment data is processed.

99% Dark is an ongoing collaborative project and series of fantasy stories, both modern/urban and medieval-esque high fantasy, that began in 2000. The Death Club, When Stars Collide, & Ragz are offshoots of 99PD.