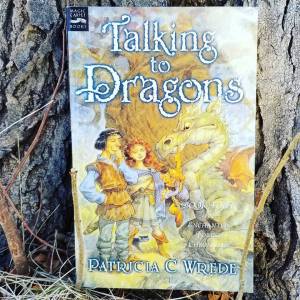 The fourth and final book of the Enchanted Forest Chronicles, Talking to Dragons, is almost as entertaining and amusing as the first three – but I would have to say it feels altogether like it was written for a younger audience.

Unlike the first three books in the series, Talking to Dragons is written in first person, which I actually felt was a little jarring. Although it occurs chronologically after the first three books, I almost feel that it would be better to read this book first, due to the fact that having read the other three really does spoil much of what’s going on in Talking to Dragons.

The characters were amusing, to a point…but it would have been satisfying to see a little more character growth, particularly with Shiara. By the end of the book, I felt that she was still just as bratty and self-centered as she was when we first met her, and I really failed to see why Daystar liked her at all. Suz, on the other had, was a highly entertaining side character – I found his quirk of questioning everything that is told to him endearing and funny.

All that said, now that I’ve finished the series (aside from a few short stories set in the same world), I’m really going to miss the Enchanted Forest and its cast of colorful characters and fascinating world and magic mechanics! Patricia C. Wrede remains to this day one of my favorite authors. – Anne ⭐️⭐️⭐️⭐️

Talking to Dragons is the fourth book in the Enchanted Forest Chronicles series.

The book follows Daystar (switching to his first person point of view) on his quest with his magic sword.

I love this universe, I love the characters, but I do feel like this book is just slightly out of place among the previous three. If you read the fourth book first, I think it could possibly work a little better, although I haven’t attempted that myself. After accidentally reading an entire series backward once, I have been pretty on top of reading books in their intended order for my own sake.

That said, the story is pretty great. As always, the characters are amusing. Some additional character development would have been nice. Just know going in that this book is slightly different from the first three, might jar you, but is also incredibly entertaining! – Jake ⭐️⭐️⭐️⭐️

Read all of our reviews for The Enchanted Forest Chronicles series:

This site uses Akismet to reduce spam. Learn how your comment data is processed.

99% Dark is an ongoing collaborative project and series of fantasy stories, both modern/urban and medieval-esque high fantasy, that began in 2000. The Death Club, When Stars Collide, & Ragz are offshoots of 99PD.